Toroq is a very special boy. Born on March 4th 2007 we were very lucky that Kirsten agreed he could come to live with us.  He is one of a few true black & white malamutes in the Uk, most are Seal & White.

He is a big softy & loves to work. He began his working career in the Uk in the  Scooter classes & then progressed to team work with his girlfriend Chaska & they were a successful team. We are looking forward to getting Koko in harness alongside him for the winter 2011/12 season & also to continuing to do some weight pull events with him too.

Koko & Toroq successfully competed in the working season of 2011/2012, their finest hour being the 1st Place achieved at the SHCGB Dyfnant Rally, & also Mark & the team broke the 30 minute time for SHCGB Aviemore 2012.

The 2013 season saw them start off well again, we even went to do a rally in Scotland where they coped well with the driving rain!

This seasons best achievement has to be the SHCGB 30TH Anniversary Aviemore rally, the race was held on the Saturday on sleds, sadly, due to ice, Sunday had to be cancelled but the team finished the E2 class in 3rd place being the Fastest All Malamute Team!! 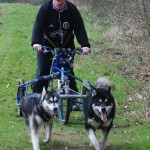 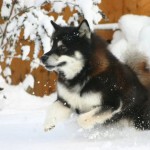 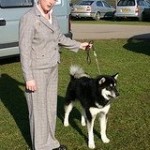 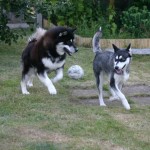